Been meaning to do a nice little post on the CN (Canadian National Railway Company) logo by Allan Fleming, as it’s close to being one of the most iconic of brand marks ever designed.

Since my post on the British Steel logo designed by David Gentlemen I became more inspired, and motivated, to do my own more detailed CN logo post.

My plan was to try and find alternative imagery for the logo as I know many websites have already covered, mentioned and referenced it.

In my search over the last few days I have come across some fine websites that have done a great job of cataloguing the the logo in a similar way to what I had planned myself. 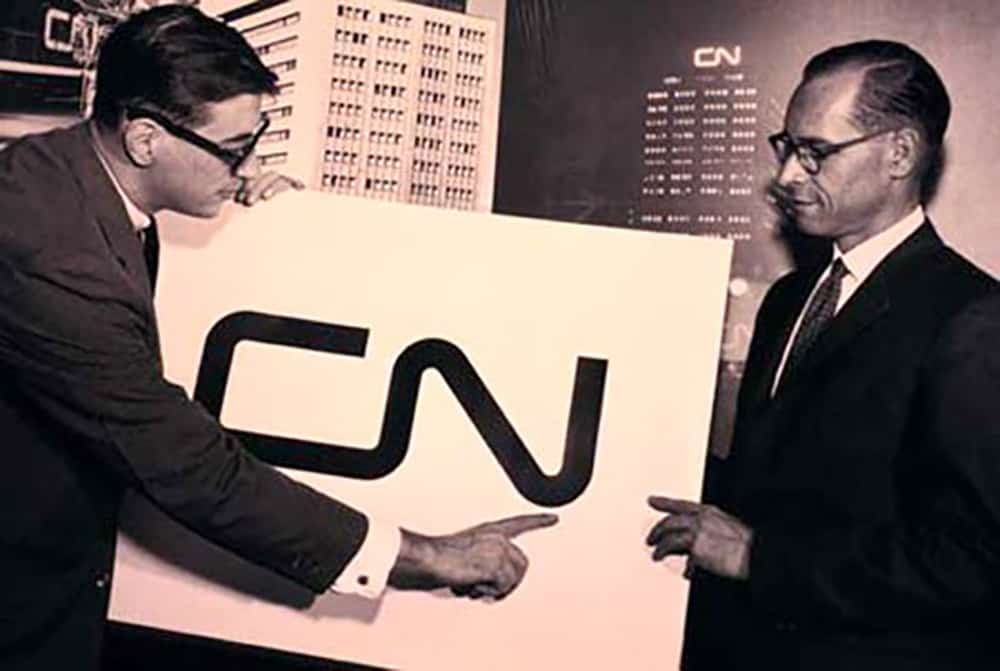 Allan Fleming (left) with Charles Harris at the launch of the CN logo in 1960.

“I think this symbol will last for 50 years at least.”

The most notable of websites that I viewed is The Canadia Design Resource which first posted details on the CN logo & brand back in 2006.

A detailed history on how the CN logo came to be can be read over at DesignKultur: Tracing the Evolution of the CN Logo : 50th Anniversary 1960–2010 which has an exhaustive colleciton of CN imagery.

The Centre for Contemporary Canadian Art holds a number of photographs and scans of Allan Fleming’s work for CN, and some of these images I have used in this post. If you navigate to Resources and then do a keyword search for Allan Fleming…

The gorgeous photographs of the CN train towards the end of this post can be obtained by visiting the official CN website and navigating to their Image Gallery where you can download very high resolution photographs.

Allan Fleming standing in front of a CN boxcart.

After experimenting with countless possibilities, Fleming hit on a particularly inspired design while sitting on a New York-bound airplane. He quickly sketched the idea on a cocktail napkin – and CN’s logo was conceived.

While conceptualizing the future, Fleming drew on the past for the kind of image that would convey timelessness. Studying the Christian cross and the Egyptian symbol for life, he borrowed the idea of using a line of single thickness. “The single thickness stoke is what makes the symbol live,” Fleming later said. “Anything else would lack the immediacy and vigor.”

The continuous flowing line symbolized “the movement of people, materials, and messages from one point to another,” Fleming said. As the eye moves from “C” to “N”, the image suggests fluidity and motion. “It’s a route line that incidentally spells CN,” Fleming explained.

But let’s leave the last word to designer Allan Fleming, who unfortunately would not live to see his own prophecy borne out. He died in 1977, just 17 years after observing:

“I think this symbol will last for 50 years at least. It don’t think it will need any revision, simply because it is designed with the future in mind. Its very simplicity guarantees its durability.”

The following images charts the progress of Allan’s idea process showing just how wild logo sketching can be; from these early sketches iconic logos arise.

Allan Fleming was barely 30 when he was recruited to come up with a fresh new logo for CN. Yet the young Canadian designer had already made a name for himself with the bold, lyrical quality of his graphic designs.

Born in Toronto in 1929, Fleming followed a rather unorthodox route to professional excellence. He left art studies at Toronto’s Western Technical School at 16 to work as a kind of apprentice designer at various firms in the city. Then came further learning experiences in England, where he gleaned as much as he could from leading figures in the design world. Back in Canada, he joined the typographic firm Cooper and Beatty Ltd. in 1957 and was working there when the CN opportunity came his way in 1959.

Fleming left Cooper and Beatty in 1962 to become art director for Maclean’s magazine. He was vice-president and director of creative services at MacLaren Advertising from 1963 to 1968, chief designer at the University of Toronto Press until 1976, then joined Burns and Cooper. Fleming’s work won him numerous awards throughout his career, not only in Canada but in the United States and at the international level.

Yet he is no doubt best remembered as the creator of CN’s logo. The inspired design certainly entrenched his reputation as one of Canada’s most talented designers. At the same time, it heightened the profile of his profession, opening the way to greater creativity in countless design applications across the country.

Visit the CN website and navigating to their Image Gallery where you can download very high resolution photographs.

To wrap up here are the CN Logo & Brand Identity Guidelines which you can download as a PDF via a link on LogoDesignLove.