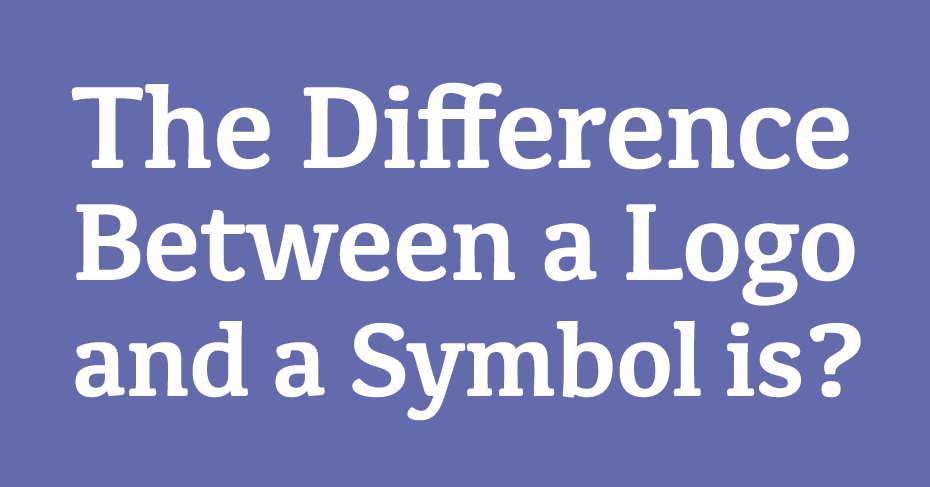 Is There a Difference Between a Logo and a Symbol? In short:

It’s OK to use the term ‘logo’, as a day-to-day generalisation, when referring to any style of brand logo design. However, when there is a chance of someone else assuming you meant an ‘icon’ when you meant a ‘logo type’, especially when discussing the requirements of a logo and brand identity job with a client, using the correct terminology becomes far more pressing. *See some examples below, in Thank God for Context.

Why stop with logo and symbol though? We have a myriad of terms that are frequently used, interchanged, and applied in various configurations and applications, terms like: logo, logo mark, logotype, type mark, word mark, brand mark, brand logo, logo design, combination mark, symbol, icon, pictograph and I’m sure I’ve missed quite a few.

There are some of us who apply the word ‘logo’ when talking about any of the previous adjectives, and there are those that care deeply about using correct and precise terminology.

Some scoff at such misguided and care free abandonment, whereas some just say it’s OK to reference ‘logo’ when talking about pretty much anything that represents the core visual ‘brand logo’: the one defining graphical element from which all of a brands life blood flows out.

When shit hits the fan, and a company does something stupid, it’s usually that ‘brand logo’ that the media will use to represent the company in question. BP screws up the environment? Then bring in the BP logo. GAP creates a ridiculously lame new logo? Bring in the GAP logo, and so on and so on.

There is also context to consider. I myself will carefully use the right term when discussing a project with the client, as it’s important that there are no accidental landings on different pages:

“I’m designing you a logo type, as I don’t feel you need a logo mark.”, I said. “But I want a logo that’s just based on words!”, remarked the client. “Yes, that’s exactly what I mean, you’re getting a logo that is based on type/words of your company name.”, I further clarified.

“I want one of those logo designs that has both a type mark, and a graphical symbol to represent my product icon, for my new start-up, but I don’t have much money, as you can imagine.”, explained the client. “So you want a symbol, not a logo mark, sitting alongside the brand name for next to nothing?”, enquired I. “No, I don’t want a logo mark, I want a logo symbol, one of those icons things that you see on toilet doors, that sort of style.”, clarified the client. “Ah I see.”, lied I.

Client: “I need a logo designed for my new iOS application, something that really will shake things up.” Me: “What you actually need then, is an icon which will represent your application on the iPhone.” Client: “OK, but I still want a logo.”  Me: “Right, so we need to include the icon with the company name, more of a combination mark then. We can do that”. Client: “I don’t want a combination mark, I really want a logo, and the icon. That’s what you said I needed. It’s really important I have a logo. You do design logos don’t you?” Me: “Oh yes indeed, logos for sure. So what I think you mean is: you need a logo to represent your actual company, then an icon to represent the application you are developing?” Client: “Say what? I’m not sure I will have enough money to have both logo and icon designed, but yes, I do need a logo designed for my actual company. So this will give me a logo for my app?” Client: “Well, no, not really. The logo design will be for your company, then the icon design will be specifically for the application. However, if you plan to seriously market and advertise your app, then we can add the application name up with the the icon, thus giving us a combination logo, as I mentioned previously. So this will be: one company logo design, one application icon, and one application logo.” etc.

I mean, I get confused with the various words available, and it certainly becomes more confusing when you are talking to someone who uses the same words, but for different meanings, and especially when they decide to just chop and change each time you are speaking.

It’s certainly not the fault of a client if they end up not utilising the correct terminology, so it’s up to you, the designer, to really clarify what they want, even if you think you know. Make sure you do DO know.

What’s The Difference Between A Logo And A Symbol?

So anyway, I put this little post together because the people over at FastCoDesign have approached, and tried to tackle, this subject in a fairly lengthy post: What’s The Difference Between A Logo And A Symbol?

Within the post you’ll find: various reasons and explanations to the pros and con’s of over generalising and trying to be too specific, when utilising one of the many ‘logoesque’ words in conversation, and other social applications.

The one quote that I like to refer to, is this one by Michael Bierut, and it sums up some of the earlier ‘made-up’ client-designer conversations:

Michael Bierut: “Everyone seems to have come up with their own definitions for this,” he says. “The distinction only matters when you’re in a situation where you need to refer to these overall identity elements precisely.”