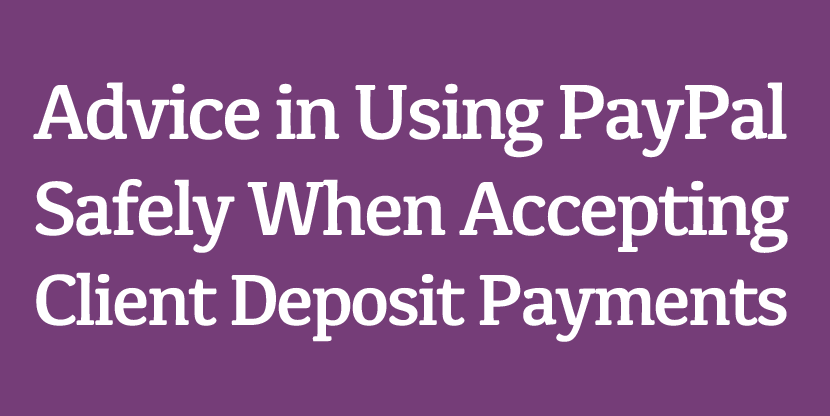 Paypal DOES provide protection for people providing digital services and goods, in so much as the client cannot, at any time, simply believe they can ‘successfully’ reverse the payment process, if something has made them a little unhappy.

What Does this mean to you, the designer?

What my experience (explained below), and the positive outcome, does demonstrate: you are safe in continuing to use Paypal, to receive: funds, deposits and payment of invoices, from clients, AS LONG as you:

This post is a direct result of a very unfortunate experience I had with a ruthless client, and Paypal, just a few days ago.

I immediately took to Twitter to vent my anger, frustration and complete bewilderment at the apparent ease at which a client of mine had managed to get Paypal to reverse a £800 deposit, paid to me, for a new logo design. I also want to add that I resisted the temptation to publicly name the client, as angry as I was, and I’m so glad that I was able to resist a somewhat strong urge.

Anger because this deposit had been paid some 6 weeks earlier, and I had subsequently worked over 100 hours, over a 6 week period, on this logo design project.

If this so-called ‘dispute’ was upheld, it basically meant I had done 6 weeks of work, equating to an £800 deposit—in real world terms this was peanuts due to tax etc, and meant I had no means to pay my mortgage and bills for this following month.

This £800 was my income/wages for the previous month, not some random bonus that could be reversed without much collateral damage. Imagine you working for 6 weeks and getting paid, then using that money to pay bills, and generally fund living a life, only to be told you had to pay it back!

After the client lodged an official dispute, a very quick and simple procedure, Paypal were just as quick to put this deposit of £800 on immediate hold, meaning I now I owed Paypal £800.

I should add here why the client was felt so aggrieved that they had to first threaten me with taking this to Paypal, then actually following through: we were close to the suggested deadline for the completion of the logo, yet they had summarily dismissed a number of very workable solutions, had themselves been late (upwards of 1 week) to actually get back to me with feedback, and changed the brief enough to warrant going back to the drawing board a number of times.

This required a refocus of my efforts trying to appease their somewhat unrealistic expectations, so it it made sense, at least to me, the deadline would suffer. There is also the mention, in my ToC’s, that I cannot come close to promising a final delivery date, for a logo design, due to certain things somewhat out of my control, like the client repeatedly not liking a design.

Each time a design is dismissed, more time is needed to come up with another design. If that desing is dimissed, then yet more time is needed. At some point I’ll draw the line, and gently hint that one of the previous ideas has to be chosen, at least as a general direction from which to work from.

Apparently all of this ‘not getting anywhere’ was all of my own making, and if I didn’t, “pick up the pace” as they quoted to me, they would look to get their deposit back from Paypal.

Sure, I’m the one designing the logos, and I’ll take my portion of the blame for not being able to visualise a constantly changing brief, and nit-picky client

So OK, I know there are often 2-sides to every story, but in all honestly, there really wasn’t anything I could have done differently, other than to have been much stronger armed earlier in the process, than I already had been, but it was my choice to continually try and get this logo design project resolved for them. Mostly because I just wanted the thing done and dusted, to the best of my ability.

Sometimes you genuinely do think the end is in sight, but then you’re not, and other times you don’t fully see you are being taken for a massive ride… This client was certainly a challenge, but I didn’t foresee them acting in this way at all.

I’ve been doing this gig for a fair while now, and I can honestly say these clients were one of the most unreasonable, most arrogant most incredibly ruthless clients I have every worked with, yet I still tried my utmost to design a logo that they could finally say, “Yes!”. I’m quite capable of biting my teeth, and riding out a period of client unpleasantness, but for all my patience, putting myself really on the line, all they could come back with was to try and threaten me with the loss of my deposit: my income and earnings for a month!

Would it be silly of me to add that ‘most’ reasonable people would accept a deposit (one months earnings) as being non-refundable, as my ToC’s had clearly stated?

A monologue that I have sent PayPal regarding the dubiousness of them playing Judge & Jury in valuing my work/time pic.twitter.com/7ubUJNWlHp

Back to that day in question, and I simply tweeted the hell out of the situation, sharing as much information (but not the clients identity) as I could, and CC’ing in @AskPayPal with every tweet, and my goodness were their a few tweets!

It became clear they were only going to assist me with the resolution process, but certainly not providing any words of wisdom, comfort to someone who was clearly petrified about loosing 6 weeks worth of labor to a shitty uncompromising client.

If you feel inclined, just take a look at my Twitter stream for that day, the 16th September 2014, starting from 11.46am. It’s a good days worth of tweeting and DM’ing to @askpaypal who I shall say were quick to establish contact, and clinically guide me through the ‘resolution’ process.

This was one of the very few times I felt so incredibly defeated, deflated, used, abused, anxious, scared and just generally very low spirited.

Even feeling like this, the hell I was going to allow this client, or Paypal for the matter, ride rough-shot over me! This is why I used social media to simply carpet bomb the living hell out of this particular situation, rather than just keep it to myself.

In order to have any luck at reversing this decision, I had to basically prove to Paypal that I had ‘delivered’ the ‘services/goods’ that were paid for.

Fortunately I had every email, every long-winded explanation of each of my logo concepts, screenshots and master files of each of the logo designs, PDF’s of the invoice, changes to the brief via there emails also showing there relentless negativity and unmovable ability to be flexible, and finally their very very stupid attempt to try and get me to, “pick up the pace a bit”.

Anyone who’s anyone should know that resorting to email threats is a recipe for disaster, and this proved to be the smoking-gun that I needed to smash that last nail oh-so-very hard.

After working with @askpaypal the whole of that afternoon, and uploading all the necessary items of proof, Paypal said they would go away and ‘investigate’ the situation.

The following morning there was an email from Paypal (above) saying:

“We have concluded our investigation of the Buyer Complaint for the transaction detailed below.

As stated in our User Agreement, PayPal’s Buyer Complaint Policy applies only to the postage of actual goods and does not apply to complaints about services and other intangible goods. Therefore, we cannot take any action in this matter.”

I would indeed be having the deposit released back to me, and the client could kiss my…  Yes I felt pleased, but still felt a nasty taste in mouth: having to go through a period of anxiety over something that could have seriously caused me some financial difficulties.

Also considerably miffed that Paypal, who seemingly have such a clear official position on this, that it still took them 24 hours to get back to me, and not even hint to me that there was likely no grounds to uphold the dispute. They knew from the outset this wasn’t about ‘a posted item not received or sent’, but was in fact about ‘services and other intangible goods’.

From where I was sitting, the outcome should have been immediately clear to them after receiving all my proof, but it still took till the next day to get the answer, and in this minor period of time I was repeatedly expecting the worse, that Paypal would side with the ‘poor aggrieved client’.

What is also worrying: I had heard other similar stories where the designer lost the deposit, which begs the question is there still such a massive lack of continuity with some of Paypal’s ToC’s, or more specifically, how certain Paypal staff might perceive a certain dispute?

Is Paypal a Risk?

During this period of uncertainty, it became clear that using Paypal to receive money from clients, for services, looked like being a massive risk. If any client could lodge a dispute, and have any amount of funds withdrawn, any period of time ‘after’ sending, then this surely would be a hugely unacceptable way of managing a payment company.

This lead to a lot of conversations, and statements, not just from me, about not using Paypal any more to accept client deposits, should Paypal side with the client.

Clearly, in the end, Paypal DOES provide protection for people providing digital services and goods, in so much as the client cannot, at any time, simply believe they can reverse the payment process, if something has made them a little unhappy.

You’ve already read the basic advice that I put at the beginning, but simply: should you find yourself in a similar situation, where a client tries to strong-arm their payment to you back, try not to panic too much like I had done.

If you have proof that you had delivered on the contract, that you delivered the digital files, and/or are still delivering on the contract, and still in the process of designing and delivering logo ideas via email etc, then according to Paypal’s own ToC’s, a client doesn’t have a leg to stand on, even though you might see funds ‘temporarily reversed’ while Paypal ‘investigates’.

Don’t even contemplate ‘not doing anything (proving your side of the facts)’, as Paypal WILL likely favour the client. Make sure you respond immediately to the ‘dispute’, and send Paypal everything you possibly can to categorically prove you had/are delivering on the agreement.

It’s not for Paypal to decide if your designs are good or bad, worth the deposit paid, or not. Paypal simply just need to see that you had acted, or are continuing to act in good-faith, much as I was.

Also, don’t feel tempted to hurtle angry emails to the client. I managed to cease all communications the moment I realised they had lodged a ‘dispute’, and I made sure that I did not contact them again, in any way.

Once it was all over, I did however, send this little email off:

That’s the last I heard form the client, and last email I have so far sent. No more, no less.