UPDATE : There is an interesting remark in the comments below by ‘Blonde’, which may put the rebrand into perspective. I have also posted a follow-up to this post: The Waterstones identity rebrand revisited

Straight to the point, my initial reaction is ‘Oh dear.’ This was my reaction when seeing it last night, and it’s till my reaction this morning. If anything, I feel more ‘Oh dear, oh dear.’ Easy to criticize without knowing the real reasons why Waterstone’s felt a rebrand was required, I am sure they had very good reasons.

I would like to know what these reasons are, but in the absence of these reasons, I am basing it on my view as both a designer and a regular Waterstone’s customer. This is not an attack on the actual logo design, but a view of the Waterstone brand as a whole and what the new identity means for it, from my perspective.

The Register don’t seem to be too ‘chuffed’ with it.

There is something about the traditional serif typeface of the previous logo. It’s solid, it’s reassuring, it’s classic and it’s smart. And look’s stunning next to a pretty face. :) I would walk towards a Waterstone’s store, seeing the familiar and reassuring ‘W’ and feel happy to be walking into such a wonderful store. Seeing the ‘W’ etched onto windows, seeing it lit up at night, lovely.

Therefore makes sense that a book seller uses the very style of font that is used for the majority of books it sells. It might be predictable, it might be obvious but it is also works.

Look at this logo, it’s beautiful. Waterstone’s made the serif ‘W’ look beautiful, not boring. We see the ‘W’ and think Waterstone’s. 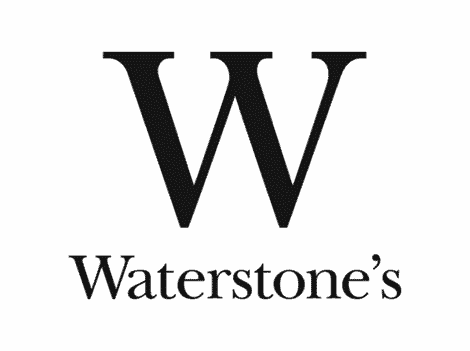 Now what will people think when they see this?

Why would you want to change this, change this established and well known identity for something pretty ‘now’.

By shedding the serif ‘W’, it has transformed itself into a trendy modern logo. I have nothing against the new design, its nice, it’s clean, smart and modern. But it’s also trendy. And an established book store should not be experimenting with type trends. There is too much at stake. In one foul swoop it has lost credibility. It not longer feels like the established book store it once was. Now feels like something entirely different.

Have they panicked with this whole ebook technology, have they looked at Apple and see that actually you can go from serif to sans-serif and feel they should do the same.

Have they assumed that to move more into a technological area one then needs to adopt a more modern identity? Did they just get bored and fancied a change? Well, that’s crap if they think any of those.

A brand agency need to be as clear about the direction of the company being rebranded as the company themselves, if anything, more so. So someone has either given bad advice, or they have been micro-managed by heavy handed MD’s over at Waterstone’s. Either way, it will reflect very badly for all concerned. Think Tropicana.

I would argue that the previous logo would could have lasted for many more years, even decades. Maybe with a slight refreshing or tweaking of the serif font, but there is no way this logo could really age. Why not? Because it’s based on heritage, centuries of book publishing.

Waterstone’s have now irreversibly changed the very essence of what made Waterstone’s, Waterstone’s. The problem they will have is that in maybe 5 or 10 years is that this logo will fall victim to typeface trends. I maybe wrong, but I don’t think so.

This has a limited shelf life and they may find themselves having to repeat this process again. Sooner than they maybe anticipated. As I said, as a logo standing on its own, its a nice design. But it’s not long lasting when put into the context of Waterstone’s and the history of book publishing.

By changing to this very smooth font, they have almost said ‘bollocks’ to their roots.

This isn’t to say that a book sellers can never use a sans-serif font, that’s not the point. Border’s had a sans-serif, although almost art-deco in it’s form. It was sturdy, it was serious.The red line creates the impression of book platform, a place to store your books, the letters spaced so that you could imagine pulling of each letter as a separate book volume.

A rebrand  doesn’t automatically mean you have to start all over again, throw away all the history, heritage and reputation. Feel’s very much like a case of ‘we will because we can.’

This new logo for Waterstone’s looks anything but serious. Just looks ‘now’ and NOT a Waterstone’s bookstore. Huge mistake me thinks.

I wrote an article on aspects of the research and interview process necessary for a successful rebranding.