For anyone who dares ask a designer to do a Design Test, to prove that they are capable and will be a good fit…

Design Tests? Yeah, that’s a no from me, so here’s a few tips & advice that I’ve picked up along my travels. I’ve Tweeted about this a few times, typically after someone has had the audacity to ask me to do a Design Test before they’d consider hiring me.

This all might sound overly cynical, but I surely can’t see any way to justify a Design Test, based on the assumption the designer has been approached, and not the other way around.

Also known as an Art Test

Here’s another one which was quite recent, and they went into quite some detail to try and justify it. I responded by declining to do the Art Test, but would be open to work on the project…

So are ‘art tests’ common requests between a client and freelance logo designer?

Approached by an agency on behalf of a client who…

A. is advert to paying deposits
B. requires freelancer to do an art test (portfolio is not good enough apparently)

I can’t think of any good reason why any designer would put themselves at risk of doing a Design Test, other than a small chance of getting a job.

You’ve got more chance of not being hired after a doing a Design Test, than you do if you oblige. Here’s a screenshot of one such request: 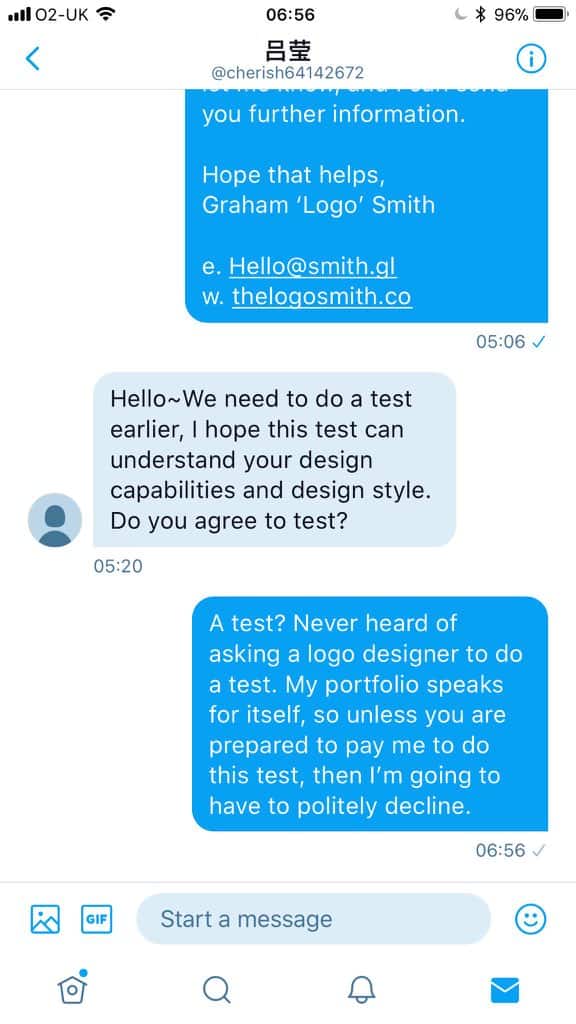 If a client has approached you to do a possible logo design project for them, then it would surely make sense that they’ve been attracted to you, or your work, or both, in order to consider you in the first place.

They can clearly see your portfolio before deciding to reach out to you, that’s the whole point of a portfolio: to show potential clients what you have done, and what you are capable of.

A Design Test to assess your skillset, your design style, your potential fit for their company/agency is just a roundabout way of getting some free ideas for circulation, and throwing you a back-handed insult at the same time.

You can be sure you’re not the only designer they’ve approached and asked to do a Design Test. Think about how many potential ideas they could get, if even just a few designers decided to oblige.

I know some people who reach out to designers aren’t themselves creative or have any sense of design. They are probably doing so at the bequest of someone else up the management chain, but that doesn’t really excuse the action itself in the slightest, that’s just laziness and greed.

When Design Tests are Legitimate

Design Tests do have a place, and that’s only really when a designer is approaching a company for a job.

Then yes, Design Tests are pretty important so the company can legitimately see what you are capable of, and maybe assess how you are under pressure in their studio.

I had to do a design test of sorts when I first applied for a Graphic Designers job at Gemini Press Limited, way back in the late 1990’s.

I was asked a heap of questions about QuarkXpress, Photoshop, Freehand, etc in the formal interview (more about testing my knowledge of the myriad of shortcuts of the main app’s, as they wanted to see how efficient I might be in a busy and demanding 24hr print environment), and then I was sat in front of an Apple Macintosh Performa and asked to layout a simple magazine cover based on a brief.

Got the job with flying colours, and ended up working there for 10 years! Promoted a few times, and finally ended up as Senior Designer and Studio & IT Manager. After 10 years I had my breakdown, actually right there at work, and the rest is history…

But this was expected, and I was prepared for it (the job, not the breakdown).

There’s no reason you should be expected, let alone asked, to do a Design Test for someone you don’t know, for a job you’re not likely going to get.

If you do want to do the Design Test, then please at least ask them for some kind of payment for your time. I tried this myself, and as expected I didn’t get a reply, which told me everything I needed to know.

“A test? Never heard of asking a logo designer to do a test. My portfolio speaks for itself, so unless you are prepared to pay me to do this test, then I’m going to have to politely decline.”

You could at least charge for a few hours work, at the very least. I don’t think that’s an unreasonable request, and possibly a way to meet in the middle… but you know, I’d rather flip-them-the-bird at the outset and be done with it.

Can’t imagine they’d be a fun client to work with in any case.