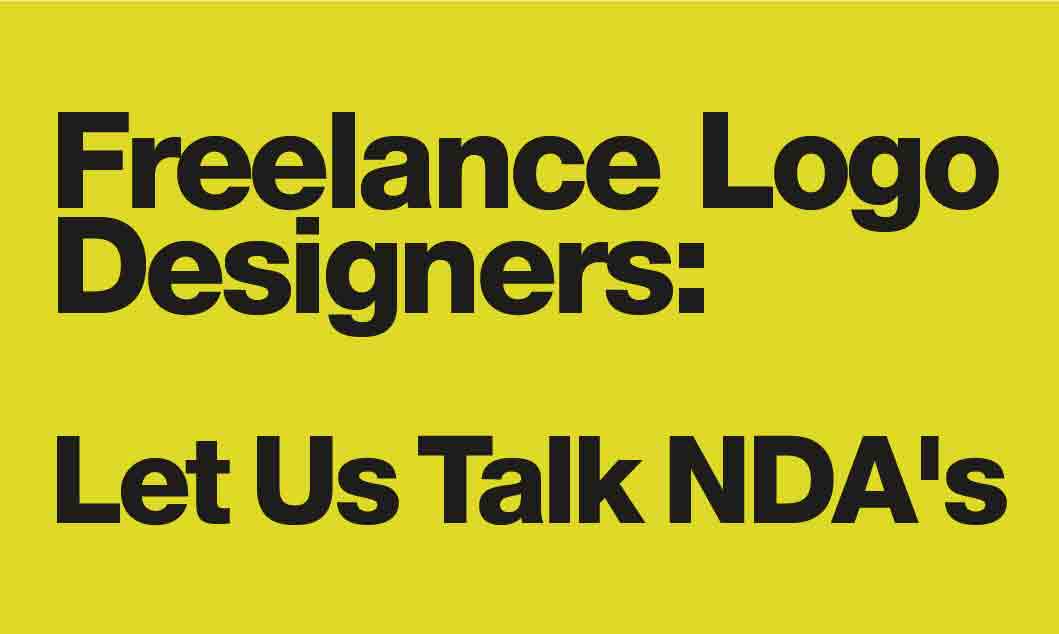 Being a freelance logo designer, or any other designer for that matter, we often see our fair share of NDA’s—what is an NDA: Non-Disclosure Agreement?—that are dispatched by way of potential clients. Signing an NDA doesn’t mean you got the job, far from it, just means you are being entrusted with some potentially valuable information.

You don’t have to sign an NDA, but the chances are you’ll not be considered for whatever project is up for grabs.

I’ve always thoroughly read each and every NDA that has come my way, and generally been happy to sign my acceptance of said NDA. I do often think they are sometimes a little overkill given some of the projects I have actually seen associated with them, but that’s just a side thought.

I think it’s generally too easy to get sucked into a one-way way of thinking when given an NDA, especially when a freelance logo designer might be perceived as a walk-over in some regards: that this form is do or die, and that one just has to go with the flow, regardless of any inconvenience the client may cause later down the line.

You know the drill: you get a lead and the project looks great, but the client requests an NDA is signed before any information pertaining to the brief is shared. You’re keen to get the job, so you fill the NDA in, and hope for the best.

Can an NDA Cause Me Problems?

If you don’t fully read and understand what NDA is for, and to what you are giving your signature too, then sure, conflicts or problems could arise.

What you might not be aware of, is that the NDA may actually contain aspects that contradict your own work guidelines, ethics and even Terms & Conditions.

Sure, you might be aware of certain inconveniences, if you read the NDA, and you might be OK taking a little hit with procedure just to land this job. Hell, it might be quite a major inconvenience, but you have at least given it some thought and made a decision to suck it and see.

Sharing an Experience with an NDA

Just going to share a little story that lead me to think more pro-actively about my own position as a freelance logo designer, before blindly signing any more client NDA’s.

I came across a project that started out very well, and an NDA was read and signed by myself. The client also, presumably, read my own Terms and Conditions (I always ask for a signed form stating they accept my Terms), and was equally content.

The deposit was paid, and we started work.

Long and short of it was that the client didn’t pay the balance. Now this meant that I was pissed, but it also meant a grey line had been forged in the virtual sand, as this suddenly opened up a myriad of thoughts and options for me. What trumped what? Did the NDA trump my own client signed ToC’s, or that the client signing my own ToC’s meant they were equally, and legally bound?

The terms in the NDA that I signed, and my terms that they signed, obviously now posed somewhat of a challenge, as they were completely at odd’s with each other. I strongly believed that I held the higher moral ground because they had simply not paid for a logo design that I had completed, and that they were now using.

I’ll just go ahead and assume, somewhat cynically, that they counted on their NDA posing a challenging situation for me to reel in.

An assumption they might have made was that I couldn’t make a fuss over this, say for example by: blogging and naming about a client who didn’t pay for the completed logo design, was that the NDA simply forbade me to discuss any part of the project. Fair enough I guess.

However, my own terms (that they signed) clearly explained that I would be free to: resell, blog, display in my portfolio, submit to external logo gallery websites, to repurpose the logo for another client, etc, if at any point the final balance was not forthcoming.

Any who, with some colourful exchanges, and me sticking very firmly to what I believed was morally right, even if not 100% legally right, I managed to ‘persuade’ this client that it was more useful and valuable for them to pay-up, than suffer at the hands of one of my massive social media outpourings. No threats were made, just relied on some common sense assumptions being made.

They had far too much to risk to play that poker game with me.

You Can Negotiate Changes Within the NDA

Don’t assume the Non-Disclosure Agreement is an impenetrable force, and can’t be revised: if the client is keen to work with you, but you have some misgivings about the NDA, specifically how it might affect your actual work for the client, then there is a good chance the client will get the NDA revised.

My experience made me realise that I would not just accept every other NDA that came my way—as they are generally pretty much the same in content—and that I would ask for each NDA to be adjusted. When I say ‘each NDA’, I mean I’ll take it on a client-by-client basis, and use my internal Gut-o-meter to smell out any possible problematic client.

This isn’t about me ripping on all clients, when it comes to an NDA, that don’t abide by the Gentlemanly Rules of Cricket, it’s just highlighting the results of one more personal experience that has lead me to practice safe client relations.

The adjustment would introduce a simple addition, simply stating that, in some form or another: if the client did not pay the full invoiced amount when presented with the final invoice, that I would be legally entitled to: discuss the project; reuse, display and promote the work I have designed, all after a ‘reasonable’ number of invoice reminders for the balance to be paid had been sent, and regardless of if they use the logo design or not, unless otherwise previously agreed.

It’s a pretty strong incentive. Not many clients, I think, are asked to reword their NDA, and especially with a change that explicitly lists the possible damages of them not fulfilling their end of the deal.

If any client refuses to add this clause, then I simply walk away. I’m not going to even entertain the idea of signing an NDA with a client who is not prepared to put their signature to a perfectly reasonable amendment.

I’m not a lawyer, and I have no idea even if I have any ground to ask for such things. To be honest, I don’t really care. If the client has to think twice about legally documenting their commitment to paying the full invoiced amount, means I just don’t want to know.

What’s really sad? Is that I had to think about playing this card in the first place.

Take from this what you will. The client wants to protect what’s theirs, and I want to protect what’s mine. Seems fair and reasonable to meet somewhere in the middle if they insist an NDA is part of the project.