It’s not exactly breaking news this, but still, on a personal level, I do find things like this interesting. I really don’t have the foggiest idea if Marrissa was behind the flickr logo changing colours, or not: I’m just taking an educated guess.

I only noticed the colour changes when quickly looking at one of my flickr photographs on my iPhone (insincere apologies for the awfully rude photo). Blink and you’ll miss it. Not sure how widespread the implementation is because you mostly get the black and white logo on the main website. 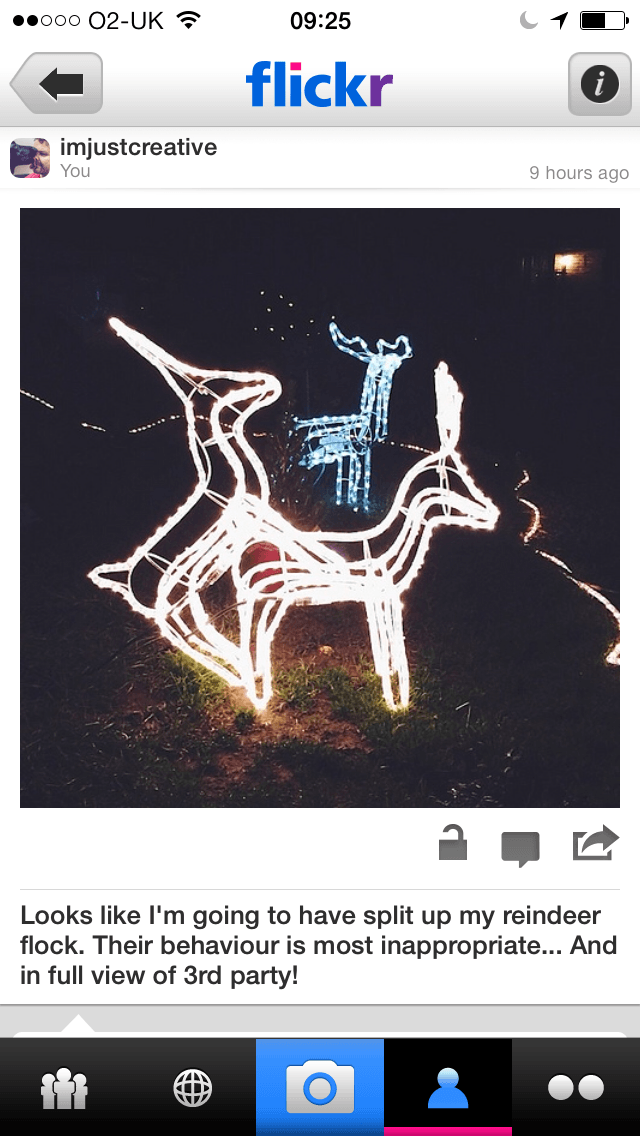 Just seems a silly little change really, the introducing of Yahoo’s purple. A token gesture (as well as moving the magenta to the dot on the i), if I ever did see one, that doesn’t really work. Now it just looks like an amateur attempt to keep the best of both worlds, and it didn’t work. Better to just bite-the-bullet and go ‘large’.

Might be just a small thing to some, but these ‘small things’ can wreck havoc on a brands heritage. Yahoo just tinkers…

Thus, another possible option (below), just to simply keep it to 2 colours, might have been to simply change the blue for the purple, and keep the magenta ‘r’ as always. This way you get more of the Yahoo branding across whilst still keeping the distinctive ‘r’.

The purple is more dominant, the overall style is still the old flickr, but it looks a little cleaner and a less messy ‘compromise’.

No idea what they might be thinking, or planning for the future, so no one can say if this is a precursor to something more substantial, but I don’t like it.

It’s a small detail, but a detail nonetheless.

Given they seem to be liking the gothic look on flickr’s main website, might have been better to simply monochrome the logo in it’s entirety and be done with it!

When you think about it, there are many variations one could do, and that’s part of the problem with Yahoo, they seem to change for the sake of change because they ‘can’ change. Yet they can’t seem to make these changes in a way that’s coherent, adheres to some uniform plan, and in the end they end up diluting once strong, and somewhat iconic, brands.