Should you use Logo Design Grids, Guides & Pretty Circles in your Logo Design?

Over the last year or so I have received a number of emails from designers asking me about the importance of creating logos using logo design grids, guides and lots of pretty circles.

I can fully understand the anxiety and uncertainty that seeing these methodical and scientific structural breakdowns can leave on your soul.

A personal example of what I am referring to is the Logo Design Grid (below) that I put together for Kerr Recruitment:

Here I have some pretty pink, cyan, navy, green, yellow lines, circles and arcs, all of which demonstrate, with the addition of some mathematical letters and arrows, my dizzying prowess at forming an unbreakable foundation for this particular logo design.

The questions I have been asked usually boils down to one thing: Is it necessary to create logos with such lazer-like-precision?

My answer is usually: No & then maybe.

Would it surprise you to learn that the grid, and all those circles and guides, for Kerr Recruitment was put together AFTER I had designed the logo?

Don’t let that lessen the impact of how all these elements look and work together tho, as it does show that having a good eye for balance and alignments, is just as important as using rulers and guides for precision.

If you can design a logo that is optically well balanced and proportioned, and THEN you add all the pretty stuff, and the pretty stuff seems to mostly fit, then that’s really quite awesome.

I will add that all the guides and measurements you see serve a purpose and are not just eye candy. In these examples they provide information on how to position the logo next to other elements in a design as well as important alignment information.

I designed the Excedr logo with basic horizontal guides to help with basic alignment as you would do with page layout designing, and a few diagonal guides, but that was mostly it.

The important thing to remember is that these additional fancy measurements were used to finalise details, and were NOT used in the basic construction of the idea.

One must have an understanding of form and visual aesthetics, and the confidence to know when something created with mathematical precision needs to be manually tweaked with something that looks better optically even if it puts your guides, grid and pretty circles out of alignment.

You might often hear of people altering letter or word spacing based on a visual/optical preference whilst casting aside the usual precise rules and mathematical measurements that can leave some text looking a little odd.

Not every logo design grid that uses precise alignments and measurements will look right. Are we looking for a natural and ‘right’ looking fit or a forced yet unnatural looking fit?

Knowing and seeing the guides and the pretty coloured lines and circles in your head whilst you are designing IS super useful.

It allows you to visually gauge space and structure so it looks good to the eye. You can then apply the more rigid process of adding the logo design grid and rules to see if things could be improved based on a more mathematical approach, or if the design is better off formed from a more organic ‘slide to fit’ approach like I did above.

The Medicine.com logo was designed with an eye for the angles, then I applied the angled guides to ensure that there was consistency between the logo mark and also the initial M in the wording.

The red circles were only added to show the client where I had given thought to this overall sense of consistency and design structure as they represented key areas of intersection of vertical and horizontal elements.

So in this particular case, the guides and such were in mind during the development of the logo, rather than being an after thought.

Every line and circle has a purpose and helped the client see deeper into the construction of the logo.

The Flip Side: Too much circles

There are cases where I see the most over-the-top structural breakdowns where every conceivable angle, curve, line and space was formed from any number of intersecting arcs and curves.

I even doubt my own sense of self when I come across these amazingly ‘over’ detailed breakdowns; pretty sure the adding of each line and circle took longer to apply than the actual design of the logo.

One only need do a Google search for Logo Grid, and you’ll see a dizzying selection of logos with grids, circles and guides. Some are legitimately useful (like the Medicine logo); some are just overkill (like the Pure Storage logo).

If you use enough circles, you could probably create any logo, and a pretty famous example of this practice is the Twitter Logo:

Even Apple’s logo design was seemingly constructed by a series of overlapping circles, so although not a Logo Grid as such, still interesting to see the approach taken. How much of the actual early development of Apple’s logo was constrained with just circles to create it with, or if they were used as a guide, and overlaid them after-the-fact, and then tidied up the logo to fit.

You can see below and via my post: Apple Corporate Identity Guidelines Notebook Rediscovered 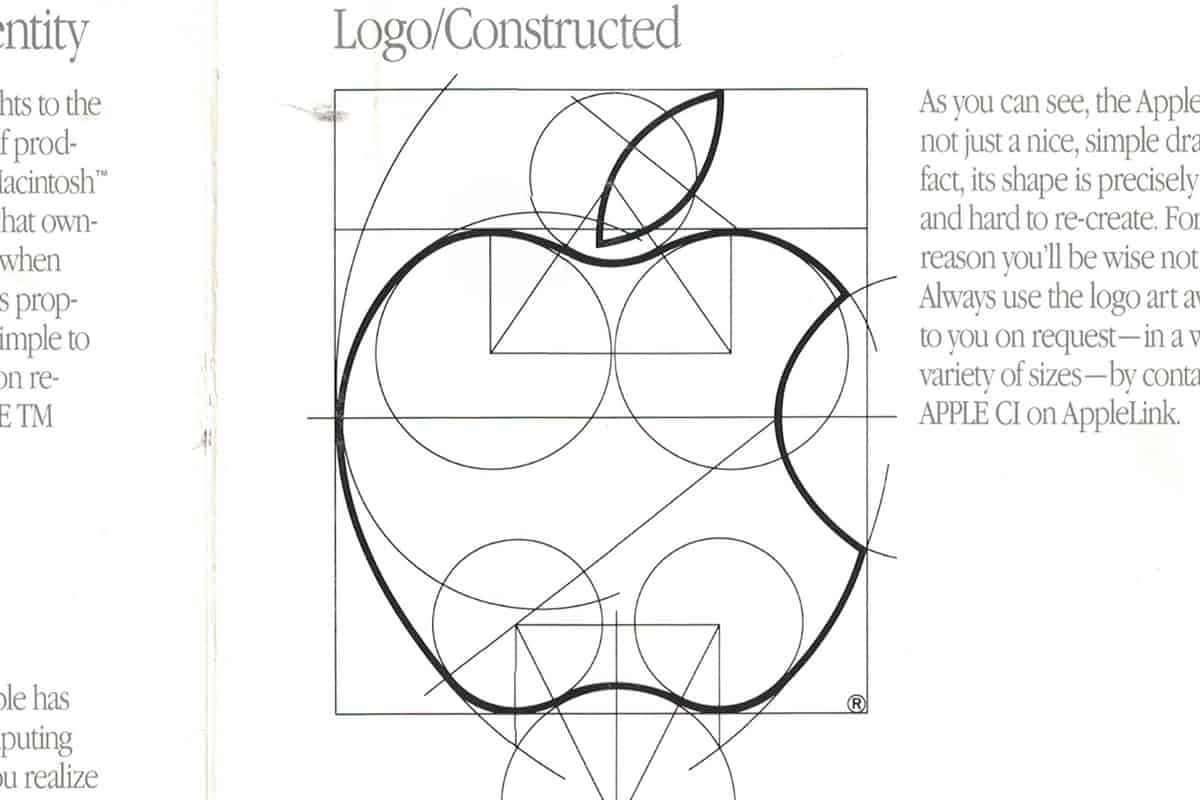 A Parody of Logo Circles

I took to knocking the super over-the-top logo grid for Pure Storage simply for a giggle, after I saw a joke Tweet about Logo Grids for these super simple famous logo designs, by Joshua Ariza.

An area of design that DOES benefit from the application of a grid with lots of rules, guides, etc would be the creation of typefaces and custom type based logos.

One example of mine was the creation of the Trepp Logo Type (below), where from the outset I wanted utter precision with the spacing and alignments from the square logo mark on the left, and horizontally along to the wording.

The spaces, margins are all super consistent

To Conclude – Logo Design Grid or Not?

There are examples out there where the designer has just had too much coffee and has felt it important to show us how a circle was formed from a million other circles.

On the flip-side there are some brilliant examples of structural breakdowns that WILL allow you to see exactly how something was formed, and allow you to see aspects of a logo design that might not have been immediately apparent.

Keep in mind that having an awareness of a visual alignment, spacing and consistency is super important and that in some cases the application of the guides, grids and pretty circles will help you tie-up loose ends and finalise an already solid logo design.

There’s certainly some value in showing your client how your amazing logo design looks on a detailed grid; there’s a huge sense of satisfaction at allowing the client a glimpse into the more precise nature of how we develop and design logos and type.

The client will also likely feel added value if they can see the amount of work that went into making it balanced and aesthetically pleasing.

The Bonus Round – Vintage Grids

Learning from the Greatest Designers

An area where you can really learn from the true masters of logo design, is to look at the few vintage Logo Design Grids available online, examples like: Montreal Olympic Logo, the VW Logo, Tokyo Olympic Logo, Swiss Airlines Logo, Russian Olympic Logo and a real oldie, the Carl Zeiss Jenna Logo.

All these would have been drawn by hand, using traditional tools, such as: compass, set square, rulers etc. No vector snap-to-grid here, exerything carefully drawn to near perfection.

I have been taking time to recreate these old vintage Logo Grids, and I’ve learnt a huge amount about the precision drawing of these amazing artists and designers.

Yes, when you look at some of the alignments and intersections at pixel magnification, especially with repeating perfect shapes like the Olympic Circles, then there are very very small discrepancies, but nothing that looks ‘optically’ wrong.

There is something very humbling and wholesome about a famous logo that is not 100% perfect, yet it did the job in every conceivable sense, every single time.