“I am a Computer – Icons of Beige“, is a marvellous collection of Retro Computer Animations by Docubyte. I remember all of these machine, and even owned one of them.

The animations on the screen are lovely, but also look out for the corresponding animated key strokes.

There’s a heck of a lot of detail here, and I’d love to know how long each one of these took to develop and design.

I am a Computer – Icons of Beige: Retro Computer Animations by Docubyte

‘I am computer’ celebrates the visual character of desktop computing machines from a colourless period in industrial design.

From word processors and video terminals, to the very first desktop personal computers, these compact machines heralded a beige age, a period of microcomputing from the the 1970s and early 80s when design standards had conformed to realise a palette of neutral coloured machines throughout offices and later the home.

Featuring iconic machines such as the Commodore Pet, the Apple Macintosh and the IBM 5150 – the first ‘Personal Computer’, the series documents an era of unique industrial design where technological progress had allowed for once room-sized machines to now neatly fit on your desk.

Technically defined as an ‘electronic machine for processing data’, these early years brought to the masses an understanding of what a computer was, what it did and what it should look like; a beige object with a keyboard attached. 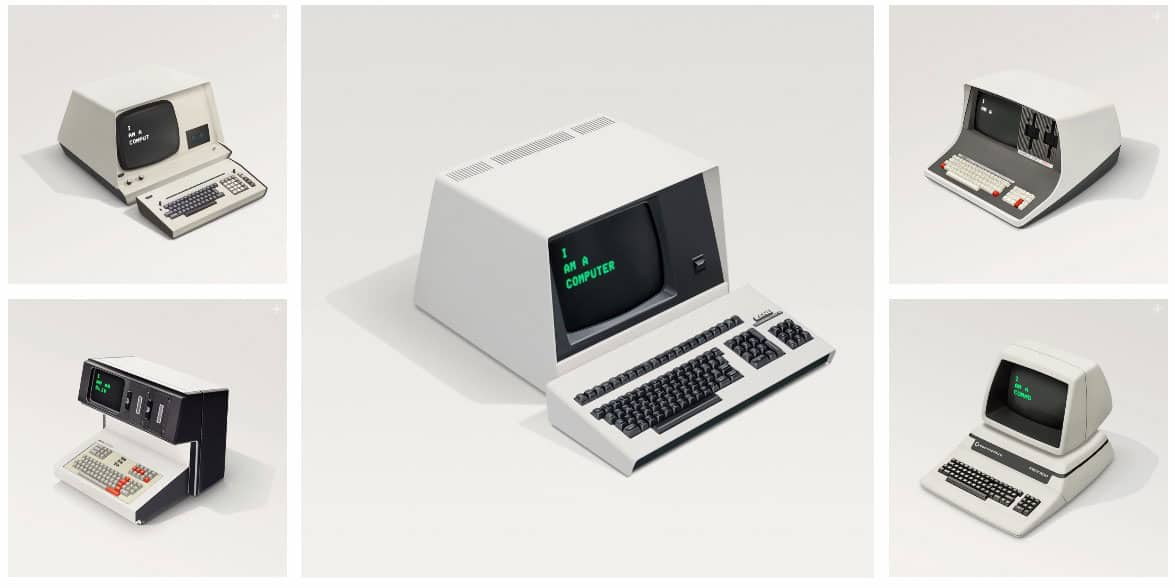 With the established period trend for neutral colours dominating technology, manufacturers sought subtle distinction with both angular and sculptural forms, endeavouring to unify display and keyboard, resulting in playful, futuristic designs full of character and personality. As the years progressed the character of these early designs disappeared, homogenising into the bland and indistinguishable modern PC synonymous with computing throughout the late 1980s and 90s.

As we move through the so-called post PC era, notions of computing and our definitions of it are evolving. Screen based technology is everywhere, the physical boxy forms from the past are now bland slabs, and the term ‘Computer’ is in decline – most notably in the recent Apple Ipad commercial where a young protagonist, engrossed with his touchscreen device poses the question ‘what’s a computer?’.

The machines in these images, offer a nostalgic reminder in an attempt to reaffirm their answer to that question, ‘I am a computer’.

With special thanks to the following:
The National Museum of Computing (TNMOC)
The Center for Computing History, Cambridge
Jim Austin Computer Museum
IBM Hursley