After tweeting a download link for the Denver, Colorado XII Winter Olympic Games 1976 Poster & Discover Denver Poster designed by Gene Hoffman, that I had just recreated, I realised there was much more to this story than just the poster, including the actual logo.

This logo and poster were used in Colorado’s effort to secure the Olympic bid in 1976, and is now part of a collection at the Denver Public Library.

Also finding out that none other than the great late master Massimo Vignelli was responsible for designing the poster and logo, that were used for the Olympic bid, made me realise I needed to follow up with a bit more information.

As Brand Channel succinctly summed up about the poster:

#DearMassimo: A Tribute to Timeless Elegance: Designed to promote Denver as a candidate city for the 1976 Winter Olympics, this poster is a telling signature of one of the greatest visual designers that we are still mourning for

Designed for a city that ultimately rejected the winter games awarded to it in 1972 amidst contested debates over infrastructure, funding and environmental impact, Massimo Vignelli’s poster, in contrast, implies a cool order and uniformity that was his best intention for Denver. It is absent of indecision, friction or noise.

The result of this little bit of research was a lovely trip down history lane, as I tried to piece together the various imagery, photographs and history of the Denver, Colorado XII Winter Olympic Games 1976, and it’s subsequent pulling out of the successful bid; the first time a successful applicant had pulled out.

The XII Winter Olympic Games were eventually awarded to Innsbruck, Austria, but of course some promotional items had already been produced for the Denver games, including: sticker, enamelled pins and embroidered patches of the logo.

For the Denver Olympic Logo (above), a portion of the poster that Vignelli designed was used as the official Winter Olympic Games symbol, which was designed in 1968.

In the image above–one of the original logo stickers still available for sale by auction– is on the left, and the vector versions that I’ve recreated are on the right.

Other various promotional elements were created for this initial Olympic Bid, which of course included the famous poster seen in this post, but also a number of other cool assets.

This Olympic logo was then used on things like: enamel pins, sticker, hats, posters, reports, the bids proposal & manual, and a whole bunch of other promotional and marketing materials.

There was an official Denver Winter Olympics Pin Sale Day (photo below), which apparently didn’t go down very well. The official Colorado Olympic Symbol was used for this pin:

Denver, along with a number of other cities, made bids for the 1976 Winter Olympic Games. Denver was awarded the games, but voters balked at the overwhelming cost, both in dollars and in perceived environmental damage the games might cause.

The games were voted down by a 3 to 2 margin, and Denver’s bid was officially withdrawn in 1972.

CAPTION: MAY 12 1970, MAY 13 1970; LET’S CELEBRATE WITH ONE ON THE HOUSE; Mrs. Joan Bublitz, left, Page Thompson and Mrs. David Dunklee, workers in the Denver Olympic Committee office, took time out Tuesday to toast Denver’s selection as host for the 1976 Winter Olympic Games.

It was a busy day for personnel in the office at 1390 Logan St. after it was announced that Denver had been chosen as site.; (Photo By John Prieto/The Denver Post via Getty Images)

The recreated poster you can see above, with the original on the left, and the 4 colour variations I have recreated in vector on the right.

This was the basis of my original Tweet, and the result was this post as well as recreated the logo: 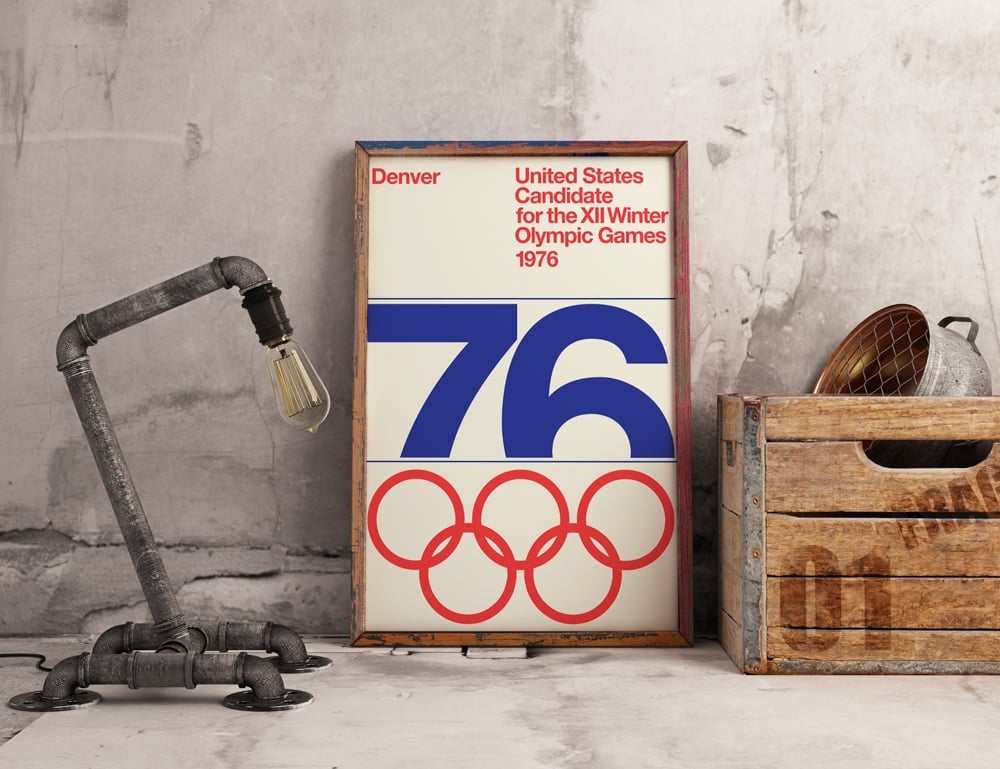 Additionally, for the purest: the following image, containing both the poster & logo, is a vector SVG, so you can actually just drag and drop them onto your desktop, then drag onto Illustrator app icon to open them up.

If you double click the SVG files, then you’ll likely end up opening a text editor instead.

Some of the information in this post was appropriated from the website of the Denver Public Library, under an article called: RELUCTANT HOST: DENVER AND THE 1976 WINTER OLYMPIC GAMES which provides a good overview of the entire Olympic bid process, if you’re looking to learn a bit more.

The following photo is of the Manual for Denver, The City: United States Candidate for the XII Winter Olympic Games 1976 which is a binder filled with information used in Colorado’s effort to secure an Olympic bid in 1976, and is part of the memorabilia collection of the Denver Public Library in Denver. 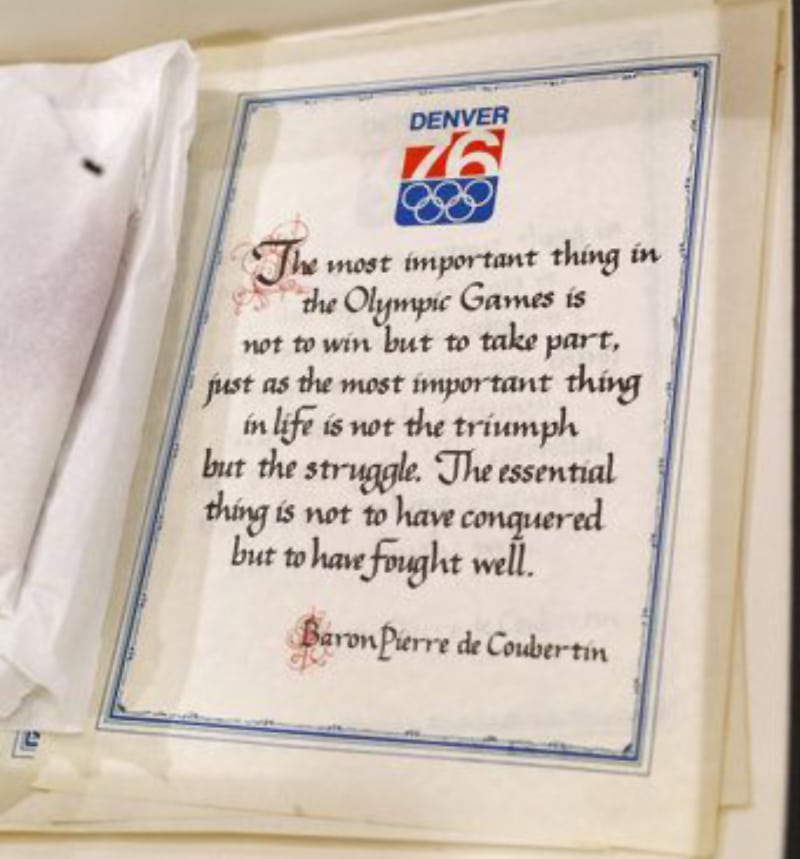 The most important thing in the Olympic Games is not to win but to to take part, just as the most thing in life is not the triumph but the struggle. The essential thing is not to have conquered but to have fought well.” Baron Pierre de Coubertin

There are various other styles of the logo pin/sticker, such as the one below, and some nice ‘hats’:

This Colorado Winter Olympics Discover Denver Poster Design is particularly sweet, but there are so few examples of it on the internet, this is the best complete image (above) I’ve so far found.

There are instances of rare copies up for auction, as this this one: Discover Denver Hockey Poster

The Discover Denver Hockey Poster is now 41+ years old; also known as the “Olympic Phantom Poster” because the Olympics were never actually held in Colorado.

The Discover Denver Hockey Poster was first designed and printed by Gene Hoffman as a public service, in the fall of 1971, and then taken over by the Denver Olympic Committee in 1972.

Gene Hoffman: Born in Pennsylvania in 1933, Gene Hoffman taught himself design and worked as an art director at an advertising agency until 1954. Gene Hoffman was working in San Francisco as a free-lance artist in the early 1960s.

I’ve also changed the overall page size to fit within the common A2 size format, rather than the very tall and thin original format.

The other version is much truer to the original with the blue/silver Winter Olympics Discover Denver wording atop the line of red stars.

If you’d like a vector and/or SCG of either of these Discover Denver Posters, then just ping me an email: glogosmith@gmail.com

Here are a couple of Gene Hoffman’s other creative endeavours, obviously a Ski theme going on:

Gene Hoffman was an award winning artist with Gold Medals from the New York Society of Illustrators, the Art Directors Club of Denver, Oklahoma City, Phoenix, and Dallas / Ft.Worth… in addition to his artwork being featured on national magazine covers.

His illustrations in ink or paint, soon moved to a style that that no longer needed trips to Flax art supply store (at that time, at Bush and Montgomery streets).

He was finding his medium, his palette, everywhere! While producing a great many collages, Gene moved to Colorado and taught at University of Northern Colorado, spreading his enthusiasm to many years of art students.