Rocket VFX (tv and movie visual effects company), is a logo & brand identity redesign project that I’ve been working on now for a little while now.

Just like a previous case study post for VIEW’D, I’m sharing the ongoing logo design process for Rocket Science VFX, as it happens and unfolds; an ongoing, and in progress, logo design case study.

I will update this ongoing logo design case study with new screenshots and photos of my mock-ups, sketches, and scribbles as they are done.

In this post are just a snapshots of the later stages of the project, showing the most recent logo design concepts, initial thoughts on the style of typography and all the messy sketches that go hand-in-hand with developing a logo design. 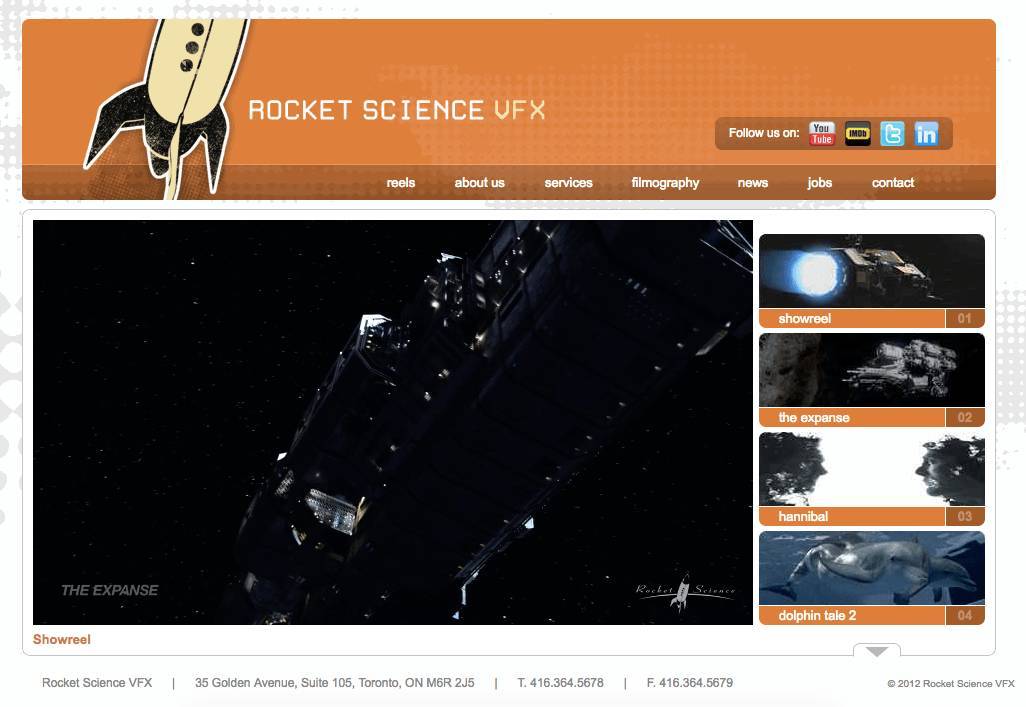 Our recent television credits include the Bafta award-winning projects: “Titanic” for ITV, and “Day of the Triffids” for the BBC, “Hannibal” for Gaumont/NBC, “Revolution” for Bad Robot/NBC, and ABC’s Primetime Emmy-nominated “The Path to 9/11”.

I initially started with the somewhat obvious: looking at a variety of existing retro, vintage, modern rocket logo designs and stock images.

No point starting a project like this without having a bloody good idea of what rocket logos and imagery already exist; obviously 1000’s. Trying to find a unique angle for the new Rocket Science VFX logo would be a fun challenge.

With a pretty literal name as Rocket Science, it would be hard to not use some form of rocket theme for the new logo, but how I would achieve this was the question.

It was really just this selection of various rocket imagery that really got me thinking about finding a less ‘obvious/well used/common/cliche’ way to represent a rocket.

No doubt we could come up with a style of rocket that was relatively new, but they all get merged and sucked into one collective vat of rocket logos.

I also researched Sputnik, as this is a logo design idea the client had previously looked at in previous logo redesign exploratory work, before hiring me to take on the rebranding.

This is where I basically went back to the previous Sputnik idea, with the dots/circles, which does reflect the link to programming scripts within the VFQ process, and tried to look for a new and different approach…

I also quickly looked at the ‘science and equations’ aspect, so focusing more on a typographic solution that literally played into the ‘science’ portion of the brand name. I kinda like the way some of the names look, using the brackets to make a faux equation out of the initials.

You’ll see I was still playing with the idea of the Sputnik visual integrated into the science equation aspect also.

However, I didn’t get a sense of ‘new and different’ from any of these, so this direction has been put on pause.

Moving on, I started playing with bigger and more solid circles, maybe planets orbits, or extensions of the Sputnik, or even molecules\atoms RE Science… This last shape started to trigger something which I needed to explore further (below).

Those solid circles with holes, eventually reminded me of rocket boosters, and the massive engines of a rocket! Seems an obvious connection, but you can get so entrenched in a previous idea, that it’s not always easy to see another direction.

Immediately excited by this new direction, as it screamed: massive, big, science, space, movies, everything that Rocket Science VFX is about, and gets involved with. I also could see how this could be developed in a clean, fresh, bold logo format, and it got us away from the overly common side profile view of a rocket.

This bottom engine view is also so powerful, and represented so much energy and power, not to mention opening up a number of visual openings for logo ideas.

Have to say, I was getting quite excited at this point…

This is the initial mock-up (red imagery above) of the rocket engine view. A really strong, clean, bold and simple image that creates a totally different perception of a rocket.

Also, this form of logo would be easier to use, replicate, scale, place and play with due to it’s square boundary box. I then, at some point, when thinking of a way to alter it a little bit from a regular 5 engine rocket.

So I got back to thinking of movies, TV’s and then another ‘lightbulb moment’: recalled that movie projector reels would be a perfect play.

By adding it a 6th big circle, you have a very ‘subtle’ reference to a movie reel. I don’t want it to be too obvious at all, but a compromise would be adding a solid circle as in the right hand version.

So the result is a compact logo mark, formed from the most powerful and amazing part of a rocket, it’s engine and boosters, along with a cheeky nod to the movie reel.

I like incorporating ‘cheeky nods’ as and when I can.

I do like this taller ‘stacked’ version (above). It has more information and wording than I’d usually be comfortable with, but if nicely spaced does works well as a prominent brand mark.

I can almost imagine flames and smoke coming out of the engines, towards the screen/user, and maybe slowly rotating as the rockets etc do when they start their journey to space.

The Next Phase for Rocket Science

After showing the client the previous logo mock-ups, and ideas, there was some great feedback.

One of the suggestions: to try and turn the previous ‘flat’ ideas, into something that had more depth.

I did play with this suggestion (sketch above) by tilting the previous flat designs, and came up with some logo sketches of the rocket booster engines, and nozzles, at a far more dramatic angle: tilting it closer to the ‘viewer’.

I’ve added hint of a ‘capsule’ nose to the top of the engines, or alternatively a very extreme depth of field, of the entire length of the rocket shooting off into the extreme distance.

In terms of being able to bring their logo to life through animation, this could see flames, smoke, and shimmering invisible heat effect, and vibration, as the engine rumbles into life.

So this is where the project is at the moment, and I’ll update this Ongoing Case Study with further updates, sketches, ideas and comments as they occur.